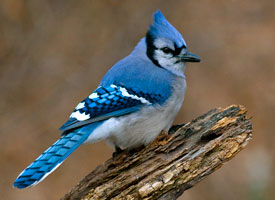 I enjoy watching the birds at the feeders outside my window and often observe life’s lessons as I see how they interact with one another. Though the titmice would not eat with the pineskin finches or the cardinal with the purple finches, they did share. They actually appeared to take turns, though sometimes reluctantly. I observed their pattern of orderly coexistence until a raucous call disturbed their meal. All of them scattered to distant points. None challenged the loud newcomer.

The blue jay in all of his blue and white splendor landed on the deck rail, and with one more call seemed to shout, “I’m here now. Out of my way.” His beauty far surpassed those of the smaller more common avian species, and he appeared to know it, and played it to his advantage. Taking his time, he picked at the seed and took his fill. He seemed oblivious to the line of birds on the house roof fearfully hoping for another opportunity. It was all about him.

Don’t you know people just like that jay? Everything revolves around them. It’s all about what they want and how it suits them. They don’t even consider others exist. I confess, loud people like that who push their way in and take over, annoy me. I decided there might be a lesson here, so I researched a little about blue jays in hopes of finding some applicable example to follow in dealing with such aggravations so this type of people could change.

Interestingly, I discovered that the cyanocitta cristata, more commonly known as the blue jay actually displays a high level of intelligence as he can solve problems, gather a cache of food rather than just consume it, and communicate more than many of his feathered friends. His hawk-like scream that scatters the birds at the feeders also sounds an alarm of danger in the forest when intruders approach. He does add value apart from his good looks.

Oh, and the lesson I learned for myself? Annoyance with jay-like people is not necessarily an indication of right and wrong in a situation, but it might be a gauge showing my perception filter is clogged.  Rather than seeing the negatives, the obstruction prevented me from looking deeper and focusing on the good to be affirmed and encouraged. Instead of pointing the finger, I had to look in the mirror. Don’t you hate when that happens?